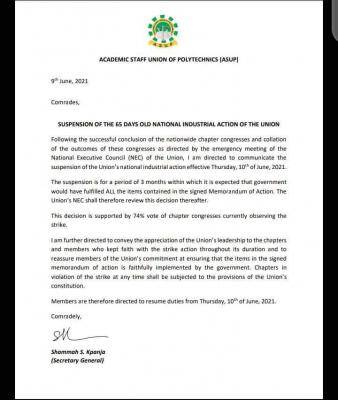 The Academic Staff Union of Polytechnic (ASUP) has suspended its nationwide strike action. This was contained in a statement signed by the Secretary-General of the union Shammah S. Kpanja

The statement reads, “Following the successful conclusion of the nationwide chapter congresses and collation of the outcomes of these congresses as directed by the emergency meeting of the National Executive Council (NEC) of the Union, I am directed to communicate the suspension of the Union’s national industrial action effective Thursday, 10th of June, 2021.