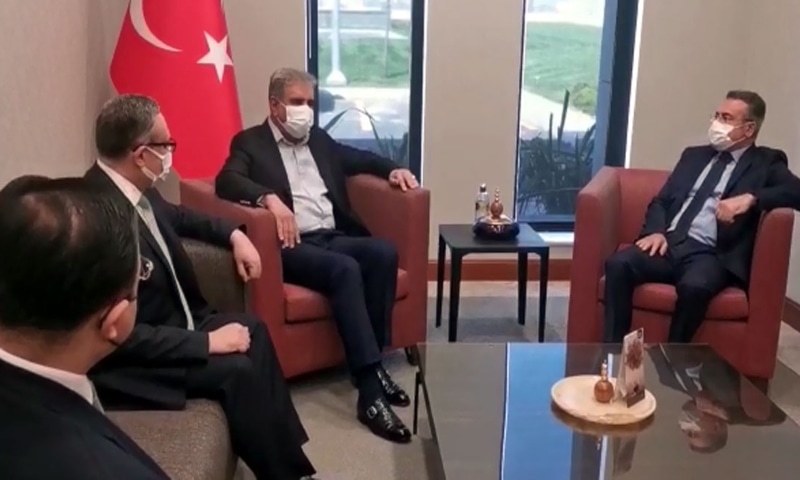 He is also expected to have a meeting with Turkish President Tayyip Erdogan and speak to local and international media in Turkey, according to Radio Pakistan.

Qureshi is visiting Turkey to “participate in a trilateral meeting of the foreign ministers of Pakistan, Turkey and Afghanistan”, according to a statement from the Foreign Office (FO).

The FO said on Twitter that the trilateral process between the three countries, established in 2007, was “aimed at contributing towards peace & prosperity in Afghanistan”.

“During the meeting, FM Qureshi will highlight Pakistan’s valuable efforts towards achieving peace in Afghanistan through an Afghan-led and Afghan-owned political process.”

“The foreign minister will discuss the latest developments in the Afghan peace process [and] exchange views on achieving the shared objectives of a peaceful and stable Afghanistan,” said the FO statement.

It added that the foreign minister would also hold bilateral talks with FM Cavusoglu during his visit.

“During the bilateral talks, the two foreign ministers will review the entire spectrum of bilateral relations and discuss preparations for the 7th Session of the High-Level Strategic Cooperation Council, which will be held in Turkey this year,” said the statement, adding that the two sides would also discuss the regional security situation.

The statement noted that fraternal relations between Pakistan and Turkey were “deeply embedded in common faith, culture and history and underpinned by exceptional mutual trust and respect”.

Qureshi’s visit to Turkey comes as part of regular high-level exchanges between the two countries, said the statement, adding that FM Cavusoglu had also visited Pakistan in January while the two foreign ministers had also met on the sidelines of the 9th Heart of Asia-Istanbul Process Ministerial Conference in Dushanbe, Tajikistan, last month.

Planned peace talks in Turkey were scheduled for April 24 to fast-track an agreement between the Taliban and Afghan government in light of the announcement by the United States that foreign troops would leave Afghanistan by September 11. They were subsequently postponed when the Taliban announced they would not participate.