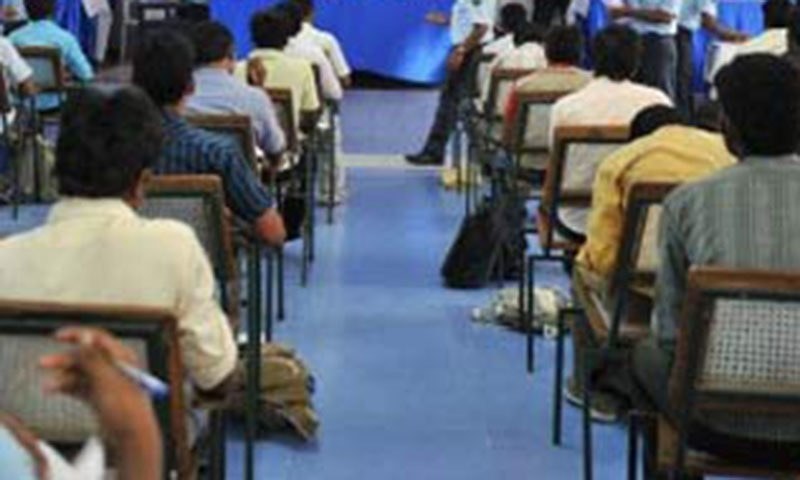 The petitions were filed by students in each of the three high courts against the CAIE’s decision and the government’s approval for holding physical exams in Pakistan.

During the hearing in the IHC on Friday, Chief Justice Athar Minallah rejected the petition after hearing arguments from both sides. “Can’t issue any directive, [let’s] send your request to the NCOC (National Command and Control Centre),” he said, adding that it was not the courts’ job to “interfere” in the country’s policy matters before moving to dismiss the petition.

Justice Minallah said that to date, the court had not interfered in any policy decisions of the NCOC related to matters regarding the coronavirus. “In any case, the Government of Pakistan cannot issue any directive to Cambridge [Assessment International Education],” he added

He said that the government only provided services related to the CAIE examinations.

“Do you want the government to stop them from taking exams?” the court inquired from the petitioner’s lawyer to which he responded that he was not asking for anything in the petition which was not already a part of CAIE policy.

He said that the petition was not against the CAIE, adding that the board had provided two options. “Saudi Arabia, Thailand [and] India have adopted the option of online examinations instead of physical,” he said.

The chief justice said that there were nine petitioners in the petition and it was possible that the rest of the students wanted to give physical examinations. “Nine petitioners cannot be representatives of thousands of students,” said Justice Minallah.

In the short order issued by the IHC, a copy of which is available with Dawn.com, it said that the decision for what mode should be adopted to assess O and A level courses was a “policy matter”.

“Since the grievance is in the context of the crisis of Covid-19, therefore, the competent forum to consider and formulate the policy […] falls within the domain of respondent no. 3 i.e. NCOC,” said the order.

“This court has already held that the decisions of the NCOC are binding and not justiciable by a judicial forum,” it added, further stating that since the issue raised by the petitioners related to the government’s policy in tackling the Covid-19 crisis, therefore, the court “is not the competent forum nor has the expertise to direct the respondents regarding what mode should be adopted relating to assessment of students”.

The order said the petitioners would be at “liberty to file a representation” before the NCOC and it would then be expected to take decisions it deemed appropriate in the circumstances.

The court order, a copy of which is available with Dawn.com, said that the petitioners could not “point out any sort of discrimination” since the respondents — which included the British Council and CAIE — were undertaking examinations not just in Pakistan but in other parts of the world as well.

It added that the Punjab government had also issued the examination schedule within the province and no exemption was given to other students in the private and public sector, therefore, “even from analogical perspective, the prayer of the petitioners cannot find any favourable support”.

The order also noted that the British Council had submitted standard operating procedures (SOP) in writing which it claimed to have conveyed to the students who would be taking the upcoming exams.

“Perusal of the SOP(s) makes it abundantly clear that a strict criteria for the safety of the students” was being ensured, it added and that the guidelines issued by the federal and provincial governments were being complied with in the SOPs and arrangements in the examination centres to prevent overcrowding.

“Learned counsel for the petitioners have not been able to make out an exceptional case due to jurisdictional barrier and being policy decision […] the apprehensions voiced by the petitioners to advocate cancellation of the examination(s) have effectively been repelled and adequately been addressed by the respondents.”

The SHC also dismissed a similar petition filed against the holding of physical examinations of A and O levels students.

A divisional bench of the SHC, headed by Justice Mohammed Ali Mazhar, issued the short order after hearing the arguments. The bench ruled that the examinations would be held as per schedule. However, it directed the respondents to ensure implementation of SOPs during the exams.

During the arguments, the deputy attorney general (DAG) submitted that the IHC dismissed an identical petition. He submitted that it was a policy matter and the NCOC had taken the decision after consulting with all the stakeholders.

The DAG further contended that there was no reason and justification to halt the exams. However, he added that issues related to SOPs could be discussed and examined.

The lawyer representing the CAIE argued that the situation of Covid-19 was better in Karachi as compared to Lahore, adding that the organisation was satisfied with the SOPs formulated for the exams.

He further submitted that the CAIE would proceed as per schedule if not restrained by the court and said that those students not willing to sit in the current exam session could avail another opportunity in October and November.

The petition was filed by some A level students against the decision to hold physical exams of A level students across the country. The petitioners had contended through their lawyer that the federal government had decided to hold the A, As and O levels exams, starting from April 26 and May 10 as per the schedule, respectively.

The petition had stated that the education ministry’s decision had sent a shockwave and created apprehension among students as on the one hand, the government had deemed it too risky for students from grades 1 to 12 across the country to attend physical classes during the ongoing third wave of Covid-19 while on the other, the government was not concerned about thousands of CAIE students.

The petitioners had asserted that due to the third wave of the pandemic, the students of O, A and As levels were being forced to risk their safety and attempt CAIE exams during the same time period for which all other academic activity had been adjourned.

They had further argued that unlike other countries including the United Kingdom, Saudi Arabia and United Arab Emirates, the federal authorities concerned had failed to furnish reasons as to why they opted to hold physical exams as opposed to evaluating students through school-assessed grades.

They had requested to declare the government’s decision of conducting physical exams of O, A and As levels students as unlawful and restrain the respondents from conducting the same.