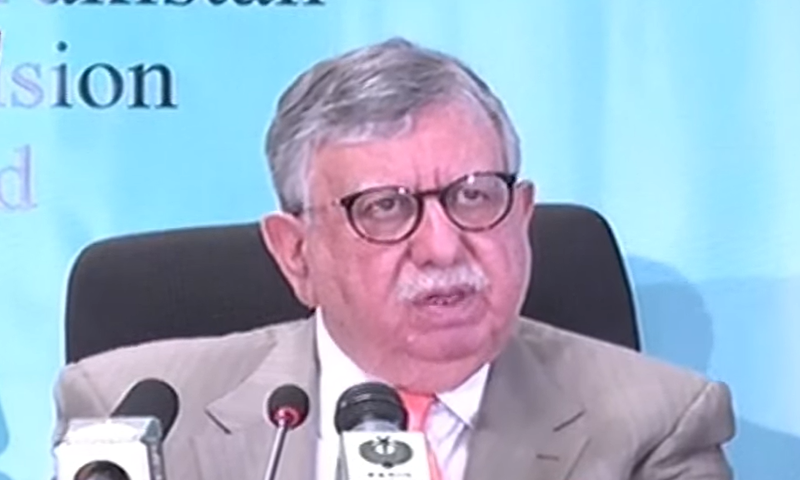 Finance Minister Shaukat Tarin unveiled the Pakistan Economic Survey 2020-21 at a press conference in Islamabad on Thursday, revealing that the industrial and services sectors had helped the country post GDP growth of 3.94 per cent in the first 9 months of the fiscal year (July to March), significantly higher than the target of 2.1pc.

According to the survey document, the industrial and services sectors surpassed the government’s expectations, and the minister particularly highlighted growth in large-scale manufacturing (LSM) which he said expanded 9pc.

The Pakistan Economic Survey is an annual report on the performance of the economy, focusing in particular on major macroeconomic indicators.

Tarin started out by underscoring the impact of Covid-19 in causing the economy to contract last year. But, he said, the decisions of this government under Prime Minister Imran Khan helped the economy stabilise which resulted in improving performance on the growth front.

“The government itself had set [GDP] growth target at 2.1pc and the IMF had predicted and even lower number. But the decisions by this government such as incentivising manufacturing, textiles, construction, and interventions in agriculture have helped the economy recover.”

According to the survey, Pakistan has recorded a provisional growth rate of 3.94pc in the fiscal year 2020-21. This came “on the basis of a rebound in almost all sectors”.

The minister said agriculture sector growth met its target despite the “cotton crop getting ruined” because yields of other crops compensated for that.

Tarin said he had told the prime minister it was time to focus on sustainable growth “until we go to 5-8pc GDP growth”.

“We will do interventions and take care of the poor. The poor man has been crushed in this stabilisation phase because the dreams we have shown them have been of a trickledown economy. And this can only happen when growth is sustainable and continuous for 20-30 years,” he said.

Tarin, however, emphasised that this growth should not be based on borrowing.

“Countries which had sustainable growth, they grew continuously for 20-30 years. What have we done? Every time we grow by borrowing money, which is credit-based growth.”

The headline inflation measured by the Consumer Price Index (CPI) was recorded at 8.6pc during July-April FY2021 against 11.2pc during the same period last year. The government had targeted inflation of 6.5pc for FY21.

The survey document says this was achieved “due to the government measures for maintaining price stability.”

“Inflation in perishable food items increased 0.1pc against an exorbitant increase of 34.7pc during the same period last year,” according to the PES.

The finance minister said the government wanted to control inflation “but prices are still high and affecting the common man”.

“So the way to solve this is by increasing production and that is why we have focused on agriculture in this budget,” Tarin said.

Federal Board of Revenue (FBR) tax collection came in at Rs3,780.3 billion, registering double-digit growth of 14.4pc during July-April FY2021 against Rs 3,303.4 billion in the same period last year.

The government had set a revised target of Rs4,691 billion for FBR, which was surpassed by more than Rs100 billion, according to the survey document.

According to the survey, during FY2021, while the world was reeling from the economic impact of the pandemic, Pakistan’s “external sector appeared as a key buffer for resilience.”

“During July-March FY2021, current account posted a surplus of $959 million (0.5pc of GDP) against a deficit of $4,147m last year (2.1pc of GDP). The main driver of improvement in current account balance was the robust growth in remittances,” it stated.

“The inflows accelerated posting a year-on-year growth of 26.2pc during the period under review over the same period last year and thus defying the general expectation of a decrease,” it further noted.

He said Pakistan’s total debt increased Rs1.67 trillion in FY21 to reach Rs38 trillion. “Out of this Rs25 trillion is local debt while around Rs12.5 trillion is foreign debt.”