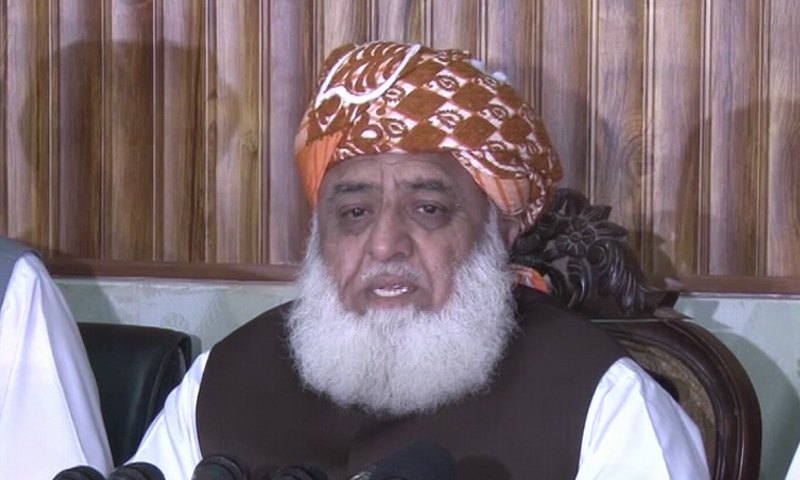 At the same time, a defiant Maryam Nawaz has cautioned the anti-corruption watchdog that its ‘wrongs’ will no longer be tolerated.

Speaking to the media after his meeting with the PML-N vice president at the latter’s residence here on Sunday, opposition alliance president Maulana Fazl said the NAB was not an independent body and alleged that it was working for other institutions. He said hundreds of thousands of workers of his party would accompany Maryam during her appearance before the accountability agency.

The meeting discussed a host of issues including the future of the PDM after PPP’s refusal to resign from assemblies, prospects of post-Eidul Fitr long march by the opposition alliance, and no-confidence motion against Prime Minister Imran Khan.

Maulana Fazl told a questioner after the meeting that the long march which was scheduled to be taken out on March 26 but was postponed sine die, would be organised but he would not say about the likely date of the activity.

He sought to dispel the impression about rifts in the PDM and said the alliance was intact and it would not allow the government to escape the responsibility for the damage done to the country through its ‘flawed’ policies.

Ms Nawaz told a questioner that the PML-N had the right to the slot of opposition leader in the Senate as per PDM’s decision and that there was no room for change in it because of any person’s win or defeat, a reference to PPP’s Yousuf Raza Gilani’s loss in the Senate chairman polls.

Replying to a query, she said Imran Khan was answerable for the performance of his government and that his future depended upon his performance.

Answering a question, she said the PML-N and the JUI-F of Maulana Fazl were strong enough to organise the long march and they didn’t need any other party’s help but it would be better that all opposition parties take a joint step for better representation of the voice of the masses.

Speaking at a youth convention of her party here later, Maryam again chided the NAB for seeking cancellation of her bail on the plea that she was giving statements against state institutions. “Who empowered the NAB to judge anyone’s statement?” she asked.

She said she would appear before NAB officials on March 26 but warned that the PML-N would fully resist if the agency tried to do any ‘wrong’ there.

“The time for offering sacrifices is over… Now it’s time to seek accountability,” she warned, saying it’s a thing of the past when the NAB would pick anyone from anywhere.

The PML-N leader said her father was threatened that his daughter would be eliminated if he didn’t mend his ways (of criticising the state institutions) but she told her father Nawaz Sharif that life and death, honour and humiliation rests with Allah Almighty and not with NAB or any other institution.

Asking the audience if they would side with her in pushing back what she said the selected and the selectors, she cautioned the PTI government to begin numbering its days in power. She said Punjab had stood up and now it won’t allow usurpation of its own or other federating units’ rights.

Ms Nawaz also warned the political rivals that those who hurl shoes at the PML-N leaders would be paid back in the same coin.

Earlier, deposed prime minister Nawaz Sharif spoke through a video link from London. He said testing times are round the corner and urged the party workers not to accept the likely arrest and imprisonment of Maryam by the NAB.

Referring to army chief Gen Qamar Javed Bajwa’s statement the other day that “we would have to put our house in order first,” Mr Sharif said that’s what he had been saying 20 years ago and reiterated it five years ago in 2016.

“Those who questioned my patriotism and labeled me a traitor for stating this are now saying the same thing.” He said his statement as then prime minister was ridiculed by an army officer by saying in a tweet that “It is rejected.” He said had his advice been accepted at that time, the country would not have faced the destruction it was passing through, and it would not have been put in the grey list by the FATF.

Calling upon the youth to support his call for exposing the faces of “unconstitutional” forces, he said only those countries would progress which respect their vote, constitution and law, and where armed forces don’t oust the elected governments.