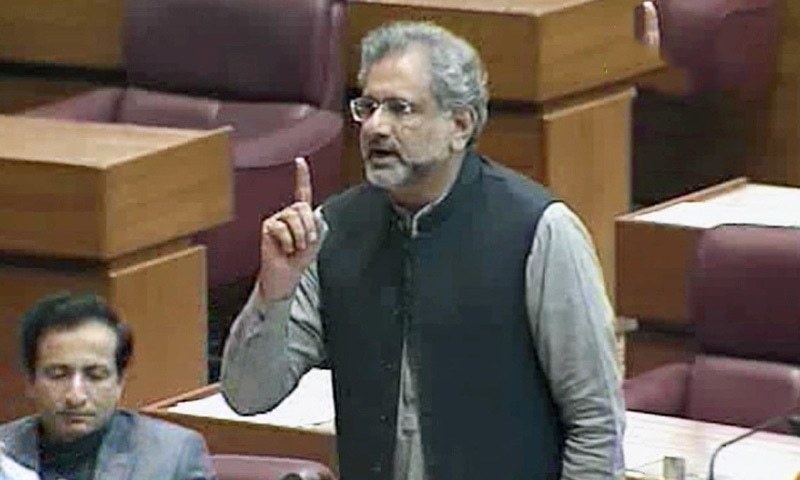 The National Assembly Secretariat on Wednesday issued notice to PML-N’s Shahid Khaqan Abbasi, asking him to apologise and explain his position over his alleged “continuous misbehaviour”, a day after the former prime minister had a verbal clash with the speaker.

Members of the government and the ruling PTI had sharply criticised Abbasi for threatening to hit Speaker Asad Qaiser with his shoe after the two exchanged harsh words during Tuesday’s National Assembly session.

“The Honourable Speaker has taken a very serious note of your continuous misbehaviour and disregard of Chair and accepted parliamentary norms and especially on the occasion when a very important business was about to transact before the House on 20th April 2021,” the letter sent to Abbasi and released by the NA media directorate stated.

The notice called upon the PML-N lawmaker to tender an apology and explain his position within seven days of the receipt of the letter “as to why action in terms of rule 21 … shall not be taken against you”.

“If reply is not received within such time, it will be presumed that you have no explanation to offer.”

The letter to Abbasi has been issued under Rule 21 of the Rules of Procedure and Conduct of Business in the National Assembly, 2007, under which the speaker has the power to suspend the membership of a lawmaker for the whole session.

Rule 21 states: “The Speaker may, if he deems it necessary, name a member who disregards the authority of the Speaker or abuses these rules by consistently and willfully obstructing the business of the Assembly. (2) If a member is so named by the Speaker, he shall forthwith put the question that the member (naming him) be suspended from the service of the Assembly for a period not exceeding the remainder of the session: Provided that the Assembly may, at any time, on a motion made, resolve that such suspension be terminated.”

The opposition, especially the PML-N, has in the past repeatedly expressed a lack of confidence in the current speaker, accusing him of being biased in favour of the government, and at times refused to attend meetings chaired by him.

On Tuesday, the situation in the lower house turned tense after a ruling PTI lawmaker presented a resolution to debate the expulsion of the French ambassador — one of the key demands of the proscribed Tehreek-i-Labbaik Pakistan (TLP) which staged several days of violent protests across the country last week.

Minister of State for Parliamentary Affairs Ali Muhammad Khan then moved a motion authorising the speaker to constitute a special committee to take up the resolution. Qaiser conducted a voice vote on the motion and it was quickly adopted.

Apparently enraged at what he perceived to be a move by the government to bulldoze the resolution through the National Assembly without listening to the opposition, former prime minister Abbasi left his seat and made his way to the speaker’s dais.

“Are you not ashamed?” he asked the speaker, who asked Abbasi to tame his language. In response, Abbasi could be heard saying: “I will take off my shoe and hit [you].”

The heated exchange between the two continued for some time before Abbasi returned to his seat and expressed his reservations regarding the resolution.

After the session, Abbasi doubled down on his remark, saying if he was not allowed to speak on the important issue of Namoos-i-Risalat “then I will hit with my shoe”.