NA session put off till May amid noisy protest 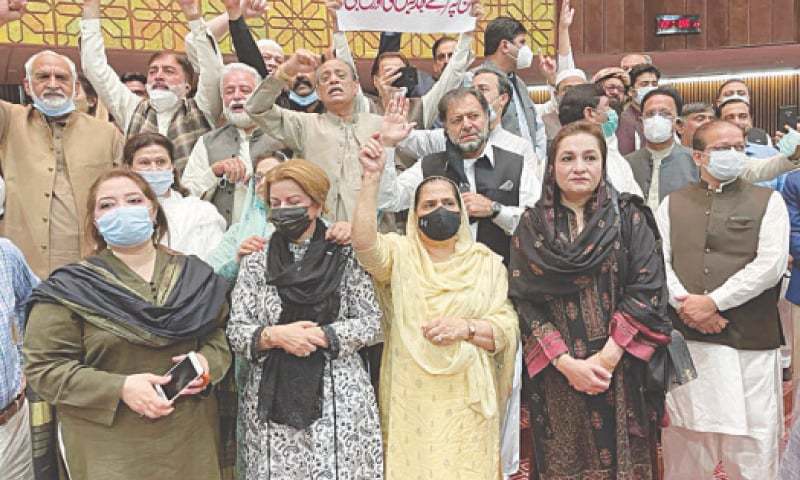 ISLAMABAD: The National Assembly session was prorogued on Friday soon after its commencement when the opposition and some treasury members, in a rare show of unity, staged a joint demonstration in front of the speaker’s dais demanding the eviction of the French ambassador from Pakistan for blasphemy.

The NA Secretariat later announced that the parliament house would remain closed for five days from April 26 till 30 and all administrative and legislative activities will remain suspended “in view of increasing cases of deadly coronavirus during its prevailing third wave”.

Many opposition members earlier thronged the dais of the speaker chanting slogans in praise of the Holy Prophet (peace be upon him) while some treasury members displayed placards inscribed with different slogans including the one “Expel French ambassador from Pakistan”. The lawmakers from the treasury benches who joined the opposition’s protest also included some senior members such as Riaz Fatyana, Khalid Magsi, Noor Alam Khan, Chaudhry Tahir Iqbal, Raja Khurram Nawaz and others.

At the beginning of the session, Deputy Speaker Qasim Suri who presided over the proceedings allowed some members to speak on the floor of the House during the question hour. However, former prime minister and Pakistan Peoples Party lawmaker Raja Pervez Ashraf stood and objected to it. He wanted to speak on a point of order on the issue of blasphemy as a resolution was recently tabled in the House seeking opinion of the parliament regarding eviction of the French ambassador from Pakistan.

The deputy speaker did not give floor to him and insisted that he would give mike to the opposition members only after conclusion of the question hour. “These questions are placed in the House after brainstorming and hard work. Therefore, we should complete the question hour first. Let me run the House according to the Constitution,” he added.

On this, some frontline opposition leaders including two former prime ministers Shahid Khaqan Abbasi and Raja Pervez Ashraf stood and later many of them thronged the speaker’s dais. They were backed by some government members who also went to the speaker’s dais holding placards inscribed with the demand for the French ambassador’s eviction.

Finally, the deputy speaker prorogued the House for an indefinite period.

Later, ex-PM Ashraf told the media that he wanted to speak on the government’s resolution presented only a couple of days ago so that the House could know what agreement the government had made with the banned TLP after which the resolution was tabled in the NA.

Pakistan Muslim League-Nawaz lawmaker Ahsan Iqbal said the deputy speaker preferred petty questions to the important resolution on the issue of blasphemy. “We demand that the government should tender apology and resume session of the lower house of parliament,” he said.

PML-N leader Rana Sanaullah claimed the government had inked the agreement assuring the TLP that French ambassador would be evicted soon.

Also, Information Minister Fawad Chaudhry in a tweet claimed that the government had presented its resolution and it was up to the opposition now to table as many resolutions as it wanted.

The issue of blasphemy surfaced last year when a French newspaper published blasphemous caricatures of Prophet Muhammad (PBUH) and it was backed by French President Emmanuel Macron. Since then the TLP (a religious-cum-political party recently banned by the government) has been demanding repatriation of the French ambassador from Pakistan to his country. The TLP had given the April 20 deadline to the government to table a resolution in the parliament for return of the French ambassador but the government arrested its chief Saad Rizvi last week that sparked violent protests by its workers. In the violence, four policemen and some TLP men were killed, 800 law enforcers wounded and public and private property was damaged.

Later, the government after ‘successful’ negotiations with the banned outfit managed to table a resolution through a lawmaker as a private members’ resolution in the NA on Tuesday seeking opinion of the House on the issue of repatriation of French ambassador.

Media reports said the French government during the violent protests by the TLP had asked its nationals here to return to France, but many of them refused to leave Pakistan.