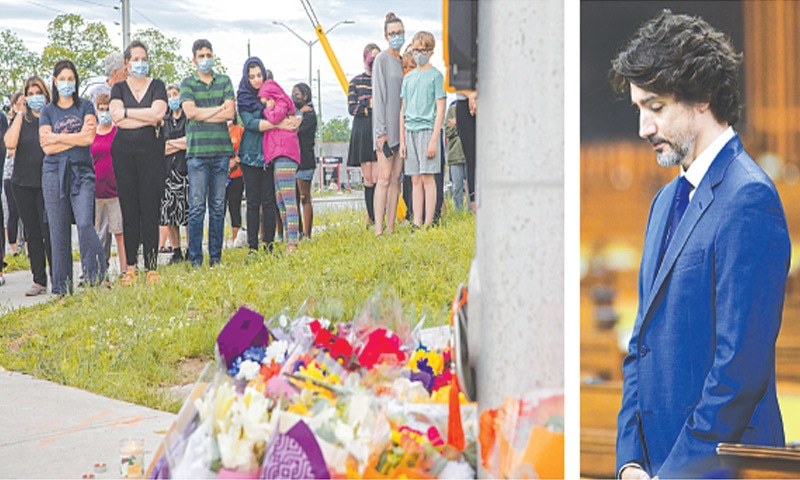 ISLAMABAD: The government on Tuesday condemned the premeditated murder of four Muslim family members of Pakistani origin in Canada, terming it a ‘terrorism incident’ and an ‘Islamophobic attack’.

Prime Minister Imran Khan led the condemnation of the incident in the Canadian province of Ontario by describing the attack as ‘an act of terrorism’.

“Saddened to learn of the killing of a Muslim Pakistani-origin Canadian family in London, Ontario. This condemnable act of terrorism reveals the growing Islamophobia in Western countries. Islamophonia needs to be countered holistically by the international community,” he tweeted.

A 20-year-old man killed four members of a family of Pakistani origin by running them over with his truck. The dead included a man, his 74-year-old mother, his wife and daughter. A nine-year-old boy from the same family was injured in the attack and is currently in a hospital.

A police official later told media in Ontario that there is evidence that this was a planned, premeditated act, motivated by hate. “We believe the victims were targeted because of their Islamic faith.”

The issue also came up for discussion in the National Assembly of Pakistan, where members from both sides of the aisle expressed their grief and condemned the incident after Foreign Minister Shah Mahmood Qureshi made a policy statement.

The foreign minister said the shocking incident was part of the growing, but worrying trend of Islamophobia. He recalled the mosque attack in New Zealand and the blasphemous sketches published in European countries, including the Netherlands and France.

Mr Qureshi said the only fault of the dead was that they were Muslims. He called for collective efforts by the Muslim countries to counter Islamophobia, saying that Pakistan alone would be ineffective in challenging it.

Expressing concerns over the rising trend of Islamophobic attacks in the western world, the foreign minister also asked the global community to pay attention and arrest the trend immediately.

The minister told the assembly that he had contacted Pakistan’s consul-general in Ontario as well as the country’s high commissioner in Canada for information, adding that details of the attack were heart wrenching and he even could not give complete detail of the incident.

Mr Qureshi said the western governments might call it a crazy act of an individual. But this was not an individual act. If the trajectory showed this was a rising trend and it was concerning, said the minister.

He said Prime Minister Imran Khan had been raising the issue with the international community for the past two years.

The foreign minister said there had been many incidents where the Muslims had been stabbed in the UK. He said around 65 million Muslims lived in Europe, approximately two million in Canada and over six million in the US. He feared that such incidents could divide the societies.

This rising trend of Islamophobia will have to be curbed immediately. If they [western countries] do not do this, the situation can worsen, society can be divided, hate speech, incitement, conflict can be created. Emotions arise and tragedies happen, he warned.

Mr Qureshi said there was a 12-hour gap between the incident and when the family was informed about it and the Pakistan’s consul general was the first person to talk to the family. He said this was not a hate crime and there was no doubt that four counts of murder were being applied on the killer, but we cannot rule out terrorism.

Giving details about the family, he said the name of the deceased man was Salman Afzal and the family belonged to Gulberg area in Lahore and had moved to Canada 10 years ago. The murdered man was a physiotherapist and the family had been living there peacefully.

The minister welcomed the Canadian Prime Minister Justin Trudeau’s tweet calling the attack horrified and said he had “adopted a clear stance which is encouraging”.

Mr Qureshi said that earlier in the day, he had a meeting with Canadian High Commissioner in Islamabad Windy Gilmour and shared the Pakistani nation’s emotions and concerns with her.

He said he had suggested to the Canadian high commissioner that Mr Trudeau should meet the family of those killed, saying it would send a good message to the Muslims living in the country. He said a telephone call had been arranged between him and his Canadian counterpart for 6pm on Wednesday (today).

Mr Qureshi also drew the attention international human rights organisations towards the issue. Besides, he expressed the hope that the international media would not ignore the incident.

Federal Minister for Human Rights Shireen Mazari said Pakistan should not be defensive and it should openly call it a terrorism act. She blamed the west for adopting double standards and said the Muslim women in France were not being allowed to wear Hijab while the nuns were free to cover their heads at public places.

Ahsan Iqbal of the opposition Pakistan Muslim League-Nawaz expressed his concerns over the rise in ‘violent extremism’ in the world.