Pakistan may soon face similar situation to India if current... 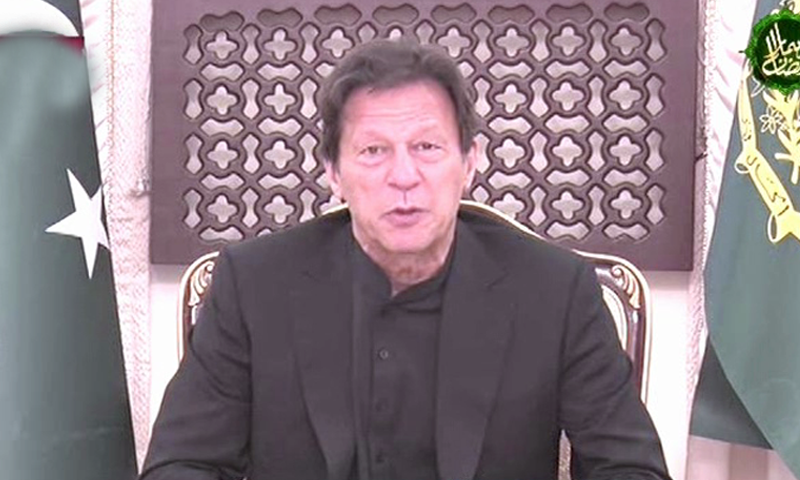 Prime Minister Imran Khan has appealed to the nation to follow standard operating procedures (SOPs) for curbing the spread of the coronavirus, warning that Pakistan may soon be facing a similar situation to India if the current trend continues.

Addressing the nation after a meeting of the National Coordination Committee, he said: “I am appealing to you to follow SOPs so that we don’t have to take steps that India is taking which means imposing lockdowns. Half the problem will be solved when you wear face masks.”

“If our circumstances become the same as India, then we will have to close down cities. We can’t do that because, as experience has shown, the poor suffer the most when lockdowns are imposed.

“People are telling me to impose a lockdown today, but we are not going to so because, and I keep repeating this, that daily wagers and labourers suffer the most.”

That is why we have not taken action, he said, adding that however long this lasts will depend on the people. The premier called on the nation to start observing precautionary measures, in the same way which you did the previous year during Ramazan,

“Pakistan was the only country which had kept mosques open last year during Ramazan. I was proud of the way our religious scholars and imams informed the people about precautionary measures,” he said.

The premier also noted that very few people were following SOPs. “If we don’t take precautionary measures, we will have to impose a lockdown which will also affect our economy at a time when it is on the rise.”

During the briefing, Minister for Planning, Development and Special Initiatives Asad Umar explained that the National Command and Operation Centre (NCOC) had been instructed to formulate a plan with the provinces in light of rising coronavirus cases.

He said that it had been decided that schools in districts with a positivity rate of more than five per cent will be closed down, including grades 9-12.

He said that restrictions had already been imposed on indoor dining. However, outdoor dining will also be banned till Eid while takeaway will be allowed, the minister said.