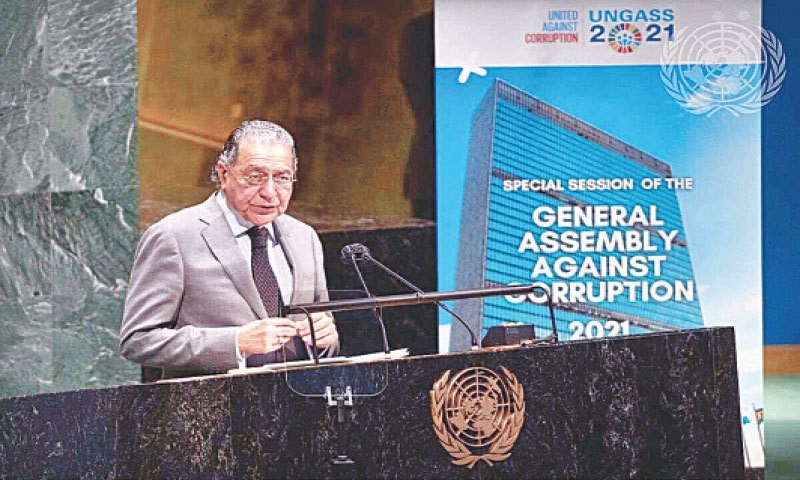 UNITED NATIONS: Pakistan has urged the United Nations to urgently set up a global mechanism to coordinate efforts against corruption.

“I am convinced that corruption, which leads to massive outflow of illicit finance from developing countries, is one of the main reasons for their economic underperformance and rising inequalities across the world,” he said.

Ambassador Akram, who also heads the UN Economic and Social Council, said a coordination mechanism should be established at the United Nations to lead global efforts to fight corruption.

Annually, an estimated $2.6 trillion — five per cent of global GDP — is lost to corruption. The developing countries lose around $1.26tr — nine times all official development assistance.

The Pakistani envoy pointed out that the Covid-19 pandemic had further widened the existing inequalities, pushed millions of people into extreme poverty, and resulted in the loss of around 250 million jobs. “Allowing corruption and illicit financial flows to continue in these circumstances is nothing short of criminal,” he warned.

One: Establishment of a global beneficial ownership registry to identify the perpetrators of corruption. Impose penalties on the enablers of corruption — lawyers, accountants and financial entities. Global standards and guidelines must be agreed and imposed to ensure this.

Two: Eliminate safe havens and secret jurisdiction that have allowed perpetrators to park over $7tr in so-called safe locations. Make new legal instruments to facilitate the obligatory return of such stolen assets.

Three: Establish standards for international companies in the extractive industries. Inter-state agreements to nullify corporate contracts based on corruption money. Impose a moratorium on all investor-state disputes in which corruption and coercion is clearly visible.

Four: Recognise that corruption related to tax fraud, evasion and avoidance constitute a major portion of the overall volume of illicit financial flows. Impose a minimum global corporate tax as the first step towards resolving international tax crimes and elimination of tax haven.

Five: Establish global standards and promote collective action to deal with the menace of corruption and illicit financial flows.