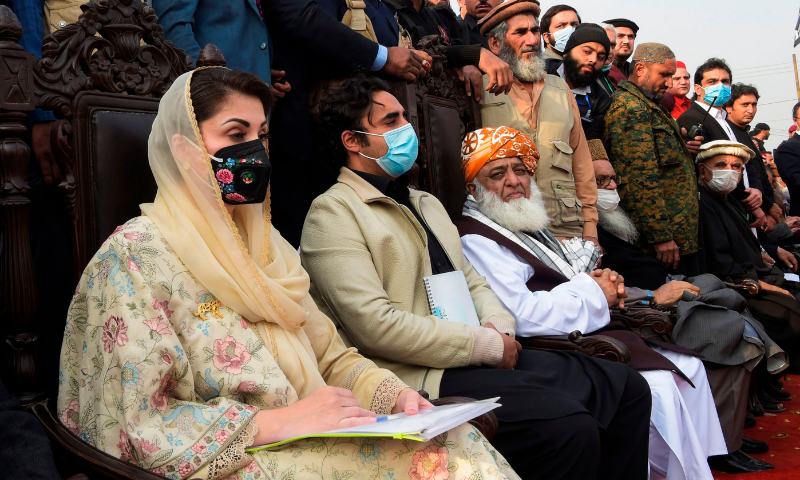 ISLAMABAD: Diffe­rences within the Pakistan Democratic Movement (PDM) on Saturday almost reached a point of no return when two major parties — the Pakistan Peoples Party (PPP) and the Pakistan Muslim League-Nawaz (PML-N) — accused each other of damaging the opposition’s unity with clandestine support of the establishment and sought an explanation over it.

In what appears to be a reaction to Friday’s meeting of the five of PDM’s component parties in Islamabad, the PPP on Saturday announced postponement of its Central Executive Committee (CEC) meeting convened in Karachi on Monday to discuss the issue of en masse resignations from assemblies.

In a statement, PPP secretary general Nayyar Bokhari said party chairman Bilawal Bhutto-Zardari had postponed the party’s CEC meeting due to the sessions of the two houses of parliament on the day. As the government had convened the Senate session on Monday and the National Assembly was already in session, “most members of the PPP’s CEC would not be able to attend the meeting”, he said.

Editorial: The PPP and PML-N are paying the price for cutting the branch they were sitting on

Political experts, however, believe that by making the sessions of the two houses of parliament an excuse for the CEC meeting postponement, the PPP has in fact sent a clear message about playing its role in the parliament to the parties that are in favour of en masse resignations from the assemblies.

The opposition party said that instead of serving not­ices (on PPP and Awami National Party) for allegedly violating the PDM’s decision on the issue of the nomination of the opposition leader in the Senate, the five parties were required to give an explanation for holding a “secret meeting” in which they decided to form a new alliance on the opposition benches in Senate.

“Those who are used to hold secret meetings under the darkness of night have now started convening secret sessions (of the alliance),” said Mr Kundi while indirectly accusing the PML-N and the JUI-F of having the covert support of the establishment.

“Those people are accusing the PPP of striking a deal who are habitual of going abroad after striking deals. Everyone knows that who is still hoping for a deal and wants to go abroad,” said Mr Kundi in his statement released by the PPP media office hours after Mr Bhutto-Zardari addressed a news conference in Khairpur to highlight need for opposition unity in order to oust the “puppet” rulers.

“Why the PML-N is still sitting in the assemblies if resignations from assemblies were necessary?” she asked. The PML-N, which was still not ready to resign from the assemblies without PPP consent, announced that the opposition’s alliance would be run without PPP support, she said.

Refuting the allegations that Mr Gilani got Balochistan Awami Party (BAP) support under some kind of a deal, she said those senators were elected as independents. She termed it a “childish attitude” of the PML-N to try to prove the independents belonged to the BAP. She recalled that former minister and PML-N leader Ishaq Dar had admitted that the PPP had consulted the PML-N leadership for consensus on Mr Gilani’s name.

Ms Marri asked the PML-N to explain as to how its senators returned unopposed in Punjab in the Senate election and how it facilitated the ruling Pakistan Tehreek-i-Insaf (PTI) to get seats from the province. She also sought an apology from the PML-N over the defeat of PDM’s candidate Farhatullah Babar due to its alleged support to the PTI candidate in the KP Assembly.

She said the PPP and the ANP would raise the issue of calling a “secret meeting of certain parties of the alliance” in the upcoming PDM meeting. “We will ask from PDM chief Maulana Fazulur Rehman why opposition alliance is being used against the opposition parties and at whose behest a conspiracy has been hatched against the long march by demanding resignations from assemblies,” she said.

Earlier, the PPP chairman had told a presser in Khairpur that Maulana Fazlur Rehman had “a very important responsibility to keep his allies together” by not taking side of one party. “Sadly, from the Senate elections up until now, only the PPP has been opposing the government and the PTI’s puppet system whether that is in Punjab or the federation. The rest of our friends in the opposition, they are doing opposition with the opposition,” said Mr Bhutto-Zardari while calling upon them to unite against the government. “I know that it is the propaganda and effort of some parties, a wrong effort, to present the PPP in such a way that we did some deal. But you know PPP’s past. We don’t do this kind of politics, and I think we should not hurl such accusations at each other,” he said.

“We are happy whenever the PML-N wins a by-election so the PML-N should also be happy on PPP’s success and we shouldn’t deal damage to such a grand purpose for which we’ve collected because of small jealousies,” he added.

Mr Malik said the Friday meeting could not be called a PDM meeting. He said it was a meeting of the opposition senators who were affected by the PPP’s decision to unilaterally nominate Mr Gilani as the Senate opposition leader and that too, with the support of BAP, which was a part of the ruling alliance.

“It was a meeting of the affected senators,” he said.

Mr Malik said they were not ready “to accept Senate chairman, deputy chairman and even the opposition leader all from BAP.”

After levelling serious allegations and demanding apologies from each other, leaders of the two parties, however, have now put the whole burden on PDM president and JUI-F chief Maulana Fazlur Rehman, saying that it is now his responsibility to keep the opposition united.

Responding to a question, Mr Malik said when Maulana Fazlur Rehman would call the PDM meeting and if he invited the PPP and if the PPP decided to attend it, then it would have an opportunity to explain its stance.