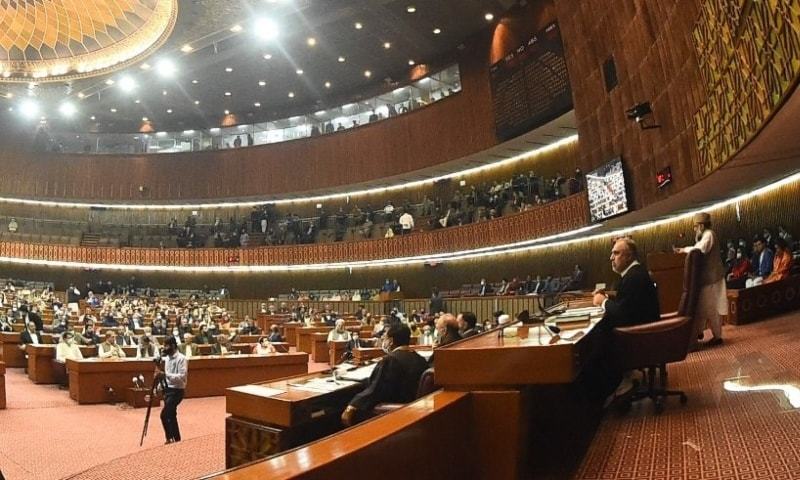 ISLAMABAD: The Pakistan Muslim League-Nawaz (PML-N) on Wednesday sent a questionnaire to the government asking it to respond to it immediately to enable it to prepare its own resolution in response to the one presented in the National Assembly on Tuesday on the issue of Namoos-i-Risalat and expulsion of the French envoy from the country.

PML-N’s chief whip in the National Assembly Murtaza Javed Abbasi sent the questionnaire with a letter to Minister of State for Parliamentary Affairs Ali Mohammad Khan, saying his party needed “clarifications and information” to prepare the joint resolution to be tabled in the house.

“The PML-N is firmly committed to Tahaffuz Namoos-i-Risalat (protection of the sanctity of the Prophet) and is preparing a joint resolution, which is reflective of the aspirations and the will of the people of Pakistan as decided in the House (NA) on Tuesday,” said the letter containing six points, a copy of which was released to the media by PML-N’s information secretary Marriyum Aurangzeb.

The letter has been written in line with the demands the party lawmakers made in their speeches soon after the presentation of a private resolution by ruling Pakistan Tehreek-i-Insaf (PTI) MNA Amjid Ali Khan during a hurriedly-called sitting of the assembly on Tuesday.

“When will the Leader of the House make himself available to initiate the debate in the House on the Tahaffuz Namoos-i-Risalat and present the policy of his government on this issue?” asked the letter, thus indirectly demanding presence of Prime Minister Imran Khan in the National Assembly.

The PML-N also sought a briefing from key ministries and the chief of the Inter-Service Intelligence (ISI) on the state’s policy on the issue of expulsion of the French envoy.

“The resolution presented yesterday (Tuesday) in the NA states that international relations are the sole domain of the state. The prime minister, the foreign minister, the interior minister and the director-general (of) ISI may brief the House on the state’s policy on the issue of expulsion of the French ambassador for which the resolution seeks a debate in the House,” said the PML-N letter.

Without referring to the Tehreek-i-Labbaik Pakistan (TLP), the PML-N asked the government to provide copies of all agreements signed by it “with an organisation recently proscribed by the government”.

It said that “federal ministers, including the minister for information, have made repeated statements in the media that the government was only committed to presenting a resolution in the House. Does this mean that the government does not want to be part of any further proceedings on this issue?”

Referring to Prime Minister Imran Khan’s address to the nation on April 19, the PML-N asked the minister to tell whether the views presented by the prime minister in his address be taken as a policy statement of the government on this issue?

“If so, what was the intent of the resolution presented in the House as it is contradictory with the statements made by the prime minister?” asked the PML-N.

PM Khan in his televised address to the nation had hinted that the government could not send back the envoy to his country on TLP’s demand, as such actions and severing of ties with France would add to economic crisis, joblessness and poverty in Pakistan.

“Has any investigation been initiated to determine the facts on the law and order situation, and assign blame for the loss of precious lives in the events of the last 10 days?” asked the PML-N.

The government had managed to present a resolution in the assembly on Tuesday on the issue of the French envoy’s expulsion from Pakistan over the publication of blasphemous caricatures in line with an ‘agreement’ with the banned TLP amid a noisy protest by the opposition members belonging to the PML-N and the Jamiat Ulema-i-Islam-Fazl.

Speaker Asad Qaiser, however, had not put the resolution tabled by the PTI lawmaker from Mianwali as a private member’s agenda for a vote after the opposition protested over the government move to bring it in the house without prior consultation with them and demanded a full-fledged debate on the issue of Namoos-i-Risalat.

Mr Qaiser had directed the government to engage the opposition and try to build a consensus on the resolution’s draft before adjourning the sitting till Friday morning.

The Pakistan Peoples Party (PPP) had boycotted the sitting that had been called on a short notice by the speaker while exercising his special powers after the ‘successful talks’ between the government and the TLP leadership in Lahore in the wee hours of Tuesday.

In their speeches, the opposition leaders had lashed out at the government for trying to bulldoze the proceedings while discussing such a sensitive matter and also protested over the absence of PM Khan from the house on such a crucial occasion.

The opposition also asked the government to present the agreement it had signed with the TLP before the house instead of putting the resolution for a vote.

The resolution tabled in the NA ‘strongly condemns’ the publication of blasphemous caricatures by the French magazine Charlie Hebdo in September last year and ‘regrets’ the French president’s act of “encouraging the elements, hurting the sentiments of hundreds of millions of Muslims in the name of freedom of expression”.