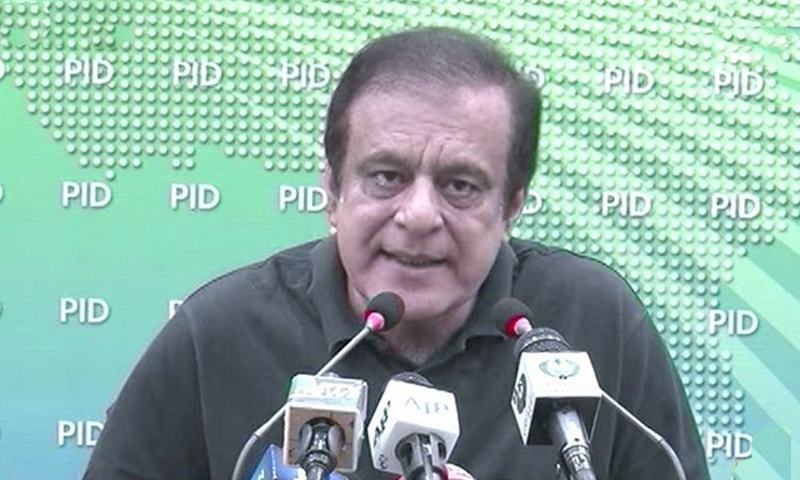 Speaking at a press conference, Mr Faraz said: “The opposition, specifically Jamiat Ulema-i-Islam chief Maulana Fazlur Rehman, should not misguide the people about coronavirus and its vaccination.”

In a statement, Maulana Fazl had sought to cast doubt over the effectiveness of the Covid-19 vaccine administered recently to the prime minister and had said “either the vaccine is fraud or the coronavirus”.

The PDM chief had also pointed out that the Election Commission of Pakistan had sent a notice to Mr Khan to appear before it for a hearing in the foreign funding case on Monday (today).

Imran thanks people for their good wishes

Mr Faraz lashed out at Maulana Fazl and said the opposition leader had sought to misguide the nation through his “non-serious statement” about coronavirus and the prime minister’s condition.

He said a vaccine became effective only after administration of its second dose some 21 days on from its first dose. “It’s a totally non-serious statement that why the premier had been infected after having been vaccinated two days earlier,” he said.

The minister said the Maulana should not use the situation to meet his political goals as the whole world, including Pakistan, was presently in the grip of a severe health crisis.

“Prime Minister Imran Khan and the first lady have contracted Covid-19 and we pray for the good health of the first couple,” he said, adding that the nation had shown its love and affection for Mr Khan through their good wishes and prayers.

Mr Faraz said people in larger numbers were now getting infected with the dreaded virus, but the availability of vaccines in the current wave of Covid-19 was encouraging.

He urged the nation to observe the standard operating procedures (SOPs) devised to combat the virus and also to get vaccinated. “It is not correct to say that the prime minister contracted the disease after getting a jab of an anti-Covid vaccine,” he said.

The government was making all-out efforts to save the lives and livelihood of the people during the third wave of Covid-19, he said.

Commenting on the PDM’s press briefing, the minister said the government was not worried about its plans, but added that the opposition alliance should “do something positive to save the people from coronavirus”.

He declared that the alliance was now a thing of the past because it was being led by “politically immature and juvenile leaders”.

“The PDM leaders are fighting for their personal interests, rather than for the sake of the people,” he said, adding that it had failed to impress the masses.

He was of the opinion that Pakistan Muslim League (PML-N) vice president Maryam Nawaz was pursuing “disastrous, egoistic and stubborn politics”. “Her childish policies had ruined the PML-N.”

Member parties of the PDM were at loggerheads with each other and were serving their own interests, Senator Faraz said.

Pakistan’s economy had started performing better as compared to other countries in the region, he claimed. Completion of public welfare and development projects during its remaining tenure is the priority of the government.

The information minister said the government was taking “optimum measures” to control inflation and was trying to enhance targeted subsidies to facilitate the masses. “The difficult phase of economic hardships has passed.”

He said that health cards would be distributed among the deserving people in Punjab, just as they had been distributed in Khyber Pakhtunkhwa under the Universal Healthcare Programme.

In a tweet, meanwhile, Prime Minister Khan said: “I want to thank everyone in Pakistan & abroad for their good wishes and prayers for the quick recovery of the first lady and I from Covid-19.”