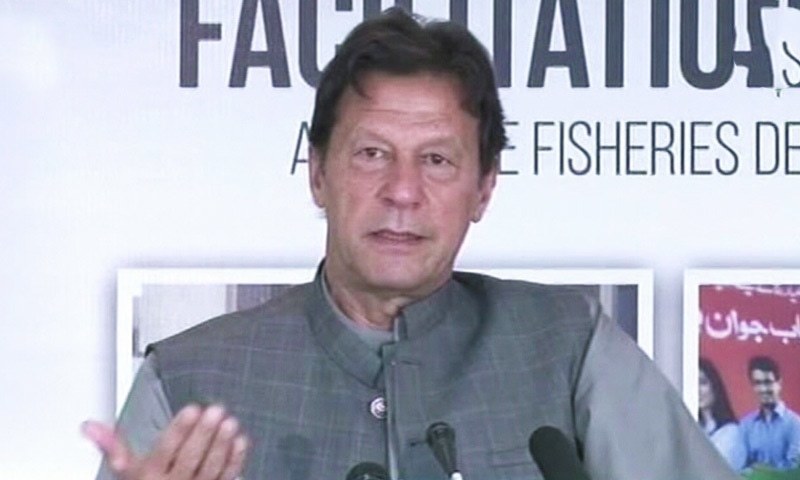 ISLAMABAD: Prime Minister Imran Khan on Thursday said that reduction of poverty and uplift of poor people’s living standard would be real success of his government.

“Our struggle for reduction of poverty is going to complete 25 years and if we manage to do so, it will be the real success of my five-year government,” he said, pointing out that the Pakistan Tehreek-i-Insaf (PTI) would be celebrating the quarter century of its existence on coming Sunday.

Addressing an MoU signing ceremony between four private banks and Ministry of Maritime Affairs aimed at provision of soft loans to poor fishermen, he said according to a 2013 report of the United Nations Development Programme (UNDP), Khyber Pakhtunkhwa was the province where poverty was highest in the country but his government managed to lift a large number of people out of poverty and (as a result) in the last election PTI won with two-thirds majority in KP.

“When I go to the masses after a five-year term of my government, my success would be as to how many people have been steered out of poverty, not how many have become richer,” he said.

The prime minister proudly mentioned the recently published UNDP report which reflected the reduced level of poverty in KP during the period from 2013 to 2018.

He said under the memorandum of understanding (MoU), four private banks would provide easy loans to the fishermen to enable them to purchase latest equipment like boats and freezers for value addition to their business besides achieving self-dependence.

He said it was for the first time in Sindh that people living in slums and shanty settlements would have their own houses. “Unfortunately 40 per cent of Karachi city comprises Katchi Abadis. We are making plans to give dwellers of these settlements their own houses,” he added.

The representatives of the National Bank of Pakistan, Bank of Punjab, Bank Alfalah and Habib Bank and the maritime affairs ministry signed the documents to provide loans to the fishermen under Kamyab Jawan Programme.

The prime minister praised the initiative aimed at uplifting the fishermen who, he said, usually lived a hard life.

He said the MoU was signed in the light of the struggle of the PTI’s which was going to complete its 25 years on coming Sunday.

Prime Minister Khan vowed to clean Karachi sea of pollution and said plans had been devised to install water filtration plants in the city. “Unfortunately our seawater has been polluted a lot due to disposal of solid waste into the sea, but my government has vowed to clear our sea,” he added.

The prime minister said his plan to develop two new cities — Ravi Urban City in Lahore and Bundle Island in Karachi’s coastal area — would bring about a revolution and help solve many problems besides generating money.

Later, during a meeting with representatives of flour mills’ associations of Punjab, Sindh and KP, the prime minister said provision of wheat flour and its smooth supply was one of the top priority of the government.

The delegation of flour mills association discussed options how to improve and ease inter-provincial movement of wheat and wheat flour.

The prime minister was told that the country was expecting a bumper wheat crop in the current season that would help stable prices of flour in the country.

An 11-member delegation of prominent Buddhist monks from Sri Lanka, who are visiting Pakistan on the government’s invitation, called on the prime minister. Mr Khan welcomed the delegation and underscored the importance of enhancing people-to-people contacts between Pakistan and Sri Lanka and strengthening interfaith harmony.

Highlighting the glorious Gandhara heritage of Pakistan, Mr Khan said that the country was proud custodian of some of the most sacred Buddhist sites in the world and offered a great religious tourism opportunity for tourists from across the world, particularly Sri Lanka. “Pakistan is a land of unparalleled natural beauty and historical and cultural sites,” he added.

The prime minister told the delegation that his government was working on creating a Holy Buddhist Trail, which would include the most revered Buddhist heritage sites in Pakistan. “Our plan is to build state of the art logistical facilities along the trail to facilitate Buddhist pilgrims from different parts of the world,” he said.

Appreciating the government’s initiative to develop Holy Buddhist Trail and renovation work being done on various archaeological and religious sites, the monks said Pakistan was ready for large-scale tourism and religious pilgrimage from across the world.

The delegation recalled and appreciated Pakistan’s long-standing friendly relationship, cooperation and solidarity with Sri Lanka. The delegation members thanked the government of Pakistan for organising their trip.

The prime minister wished the delegation a pleasant stay in Pakistan and asked them to share their experiences with others about Pakistan’s unique hospitality, natural beauty and Buddhist heritage, motivating others to undertake tours to Pakistan.