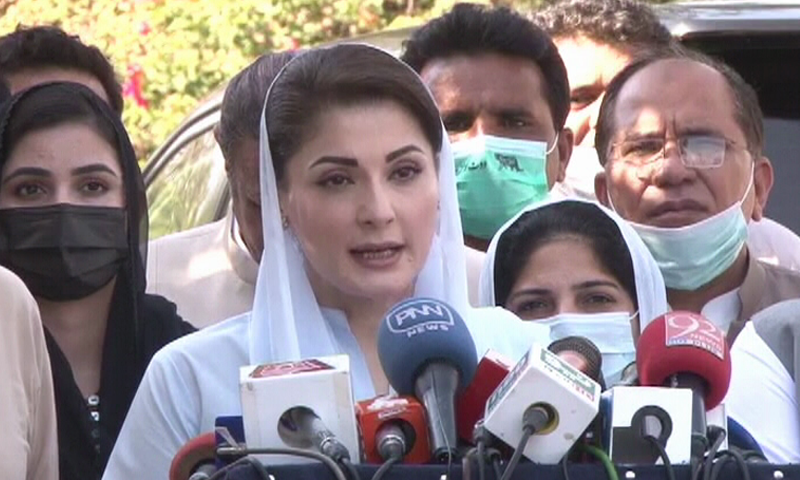 PML-N Vice President Maryam Nawaz said on Saturday that she would not criticise the PPP beyond a certain limit, adding that she had a “good relationship” with party chairman Bilawal Bhutto-Zardari.

Maryam made the comments while responding to a question from a reporter during a press conference in Lahore. “If the PPP has decided to part ways politically, then it is responsible and can explain the reasons for doing so.

“If would have been better if it would not have happened. But the PPP is not my target, I choose my targets after politically strategising and deliberating. The PPP is not included in this. I have a good relationship with Bilawal and other members of the party.”

Earlier this month, the PPP had asked all party members to resign from their positions in the opposition alliance — the Pakistan Democratic Movement (PDM). The decision came after the Awami National Party (ANP) parted ways with the movement.

Both parties had taken the step after being issued show-cause notices by the PDM for nominating Yousuf Raza Gilani as the opposition leader in the Senate “in violation of the unanimous decision” of the alliance.

During today’s press conference, Maryam stated that her earlier accusations of “submitting to the baap“ during the Senate election, was not an attack on one particular party but rather a “matter of principle”.

“The PDM narrative was damaged, and the image of a divided opposition was presented which should not have happened. But I don’t want to escalate this any further.

“The people are watching, and can see who is doing what as well as what each party is deciding. They will hold parties accountable. But I had made a promise to the people, that we will fight in the political arena.

“Therefore, we will fight [against each other] in elections but we will not cross a certain limit. We will not hit below the belt. Even today, I still have good relations with Bilawal, the PPP and other parties which includes the ANP.”

She added that the PML-N was competing against the parties in elections, citing the example of the upcoming NA-249 by-poll. “But beyond a certain limit, we do not want to criticise them, launch personal attacks or become personally involved.”

She added that she did not want to bring political competition to a personal level. “This is the promise I made to the people. We will fight politically, but nothing more than that.”

Commenting on the PDM, she said the opposition alliance was still standing strong. “Maulana Fazlur Rehman has called a meeting on April 26 where we will deliberate on a new strategy. The future [of the alliance] is bright.”

The PML-N leader began her press conference by stating that she had cancelled her visit to Karachi due to the country’s coronavirus situation. Maryam had planned to visit the port city to support PML-N’s candidate Miftah Ismail in the April 29 by-election of NA-249.

Earlier today, Pakistan reported 157 deaths from coronavirus in the last 24 hours — the highest single-day death toll since the start of the pandemic as the country’s total fatalities rose to 16,999.

On Friday, Prime Minister Imran Khan announced he had asked the Pakistan Army to assist the police and law enforcement agencies in enforcing SOPs for curbing the spread of the coronavirus, warning that Pakistan may soon be facing a situation similar to India if the current trend continues.

Addressing today’s press conference, Maryam said: “The coronavirus situation has drastically escalated in the past few days. We were observing the pattern […] so I thought that it would be best to cancel the visit for the sake of the people’s health and safety.”

She added that she took the decision after talking to her father and former prime minister Nawaz Sharif as well as Leader of the Opposition in the National Assembly Shehbaz Sharif. “Everyone was of the opinion that the people’s lives are more valuable and that we should not put them at risk.

“Personally, I wanted to go to Karachi. I was excited [for the trip] and wanted to present the PML-N’s manifesto to the people of NA-249,” she said.

“I know the problems the people of the constituency are facing. I am in constant contact with our candidate, Miftah Ismail,” she said, adding that he was a “hard working and bright” man who has delivered whenever he has been given the opportunity.

“Karachi has faced a lot of issues and seen a lot of incompetence [in governance]. So I appeal to the people to vote for the PML-N, to vote for development. You also have a right as Karachi is the country’s economic hub.”

She claimed that Shehbaz had won from the constituency in 2018 by several thousand votes. “But vote stealers stole [conspired] and rigged the poll by several hundred votes. I know that even today, the heart of NA-249 still beats with Shehbaz and Nawaz.”

She said that the rulers the people had been burdened with had not delivered on their promises. “The people of Karachi should vote for the PML-N to change their fate.”